'It Happened in Italy' by Elizabeth Bettina 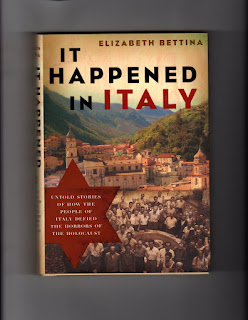 When an American woman of Italian ancestry tries to discover why a rabbi appears in a photograph taken on the steps of the Italian church where her grandparents were married, she learns of a story kept nearly secret for sixty years: there were Jewish internment camps in Italy in World War II.

The woman is Elizabeth Bettina, a native New Yorker who lived for a time in Campagna, Italy. She thought she knew a lot about the area and its people, her family. The new facts she discovered led her to meetings with Holocaust survivors, monsignors and more.

“It Happened in Italy” is a book of surprises, as we accompany Bettina on her journey of discovery. While the rule of investigation is often “follow the money,” Bettina learned to follow the photos. Her book is filled with confirming photos and documents, worthy of a research paper. She recounts the thrill of finding the pieces of information and joining them into a picture of the story of a nation that did not bow to the Nazi plan of a “final solution.”

Don’t begin this book looking for a taut war thriller. It is, instead, a warm blanket. As Bettina learns more about the role of the everyday Italian people in Jewish survival of World War II, she shares her delight with the reader. Her goal is to explain the difference between treatment of Jews in Italy and most of the rest of Europe. The book is much like a personal journal, opened for our knowledge. Her thoughts, as well as her research, are there for us.

Bettina has taken on the cause of telling the story to the world. It is a story of compassion, human dignity and the triumph of goodness over evil. As much as we should remember the horrors of the death camps, we should also remember that goodness can make a stand. Bettina provides a tool toward that remembrance.

I enjoyed reading this book and learning about the Italian perspective on “prison camps.” It is a gentle yet celebratory story. While there is sadness in some of the events, the overarching emotion is happiness. I recommend it for readers in search of a true story about real people caught in world events. No flashy super heroes here, but people made more heroic by actions without special effects or benefit of a script writer’s solution.