When I read a romance, I want a couple of things: believable people I can care about, an interesting setting and a twist. Summerside Press has undertaken the ambitious project of a series of romance novels set in each of the fifty states, but not in the readily identifiable main cities. The books take place in small towns with unusual names. The “Love Finds You in” series promises to introduce us to a variety of places and authors over a period of several years. 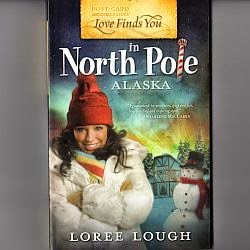 I first encountered the series at my local Christian bookstore with Loree Lough’s entry, set in North Pole, Alaska. With a name like that, I know I’m going to love the town, if nothing else. But Lough worked her usual magic and delivered a touching story along with the delightful locale.

Sam Sinclair is determined to make her own way in the world, away from the security of her family in Baltimore, MD. To that end, she accepts a job cooking at a North Pole, AK hotel and heads northwest in an old RV. She loves all things Christmas with a passion and just knows that North Pole is the place for her, even though she hates cold.

Bryce Stone is a Marine recovering from injuries received in the service of his country. He has returned home to North Pole, in spite of the all-year-long Christmas theme of the town. He isn’t Scrooge, but he isn’t far from it. Stone’s Aunt Olive runs the family store for him, a wildly eclectic Christmas boutique named Rudolph’s.

Both Sam and Bryce have unresolved issues plaguing them. Sam arrives in North Pole to find her promised job gone. Bryce doesn’t want to run a shop, especially not one so unabashedly Christmas-y.

When these two clash, they clash with the impact of two runaway trains. Can the uptight Marine and the elfin-spirited chef overcome their differences to find love? Half the fun of any romance is seeing what the two leads must do to get to the point of admitting their love.

Lough creates a romantic story with a light touch, letting her characters tell their stories with a natural flow. Don’t expect a weak story, though. She has built a strong frame to showcase the plot, with plenty of humor and drama along the way.

I will be looking forward to other books in the series, as well  as other books by Loree Lough.