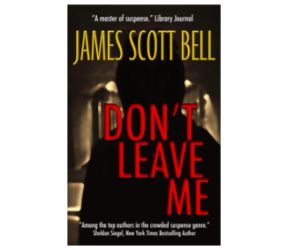 Chuck Samson leads a complicated life: he cares for his special needs adult brother; he buried his wife just a few months ago after she was killed by a drunk driver; and this morning, on his way to work as a teacher at a private academy, he rear ended a very unpleasant fellow who cut in front of him and stopped. So unpleasant a fellow, in fact, that the guy pulled a knife on Chuck and scared his brother Stan into near hysterics.

With an opening situation like that, a reader can expect a high intensity thriller and Christian novelist James Scott Bell delivers one in "Don't Leave Me." Bell serves up an intricate story of lies and betrayal that stretches its tentacles across oceans. A tense story the covers a lot of territory, “Don’t Leave Me” serves as a psychological mystery as well as an action packed drama.

Read more on this novel here.