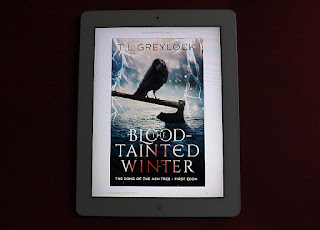 In a stunning display of writing prowess, author T L Greylock brings an epic tales of Norse heroes into modern language. The Blood-Tainted Winter, subtitled The Song of the Ash Tree - First Edda, offers a sweeping story told from the perspective of Raef Skallagrim, a young man who wants nothing more than to take a ship and make his fortune at sea. Raef’s father Einarr, the lord of Vannheim, has other plans for his son and heir.

When the death of the king leaves a leadership void to be filled, the young lord finds himself in desperate circumstances. Surrounded by those who call themselves friends, he must make difficult choices. Can he trust those at his side? Will he and his warriors ever see Vannheim again?

Peopled with colorful characters with names like Thorgrim Great-Belly and Findar Urdson, the Far-Traveled, the story charges its way across Midgard at a gallop. Each character plays an important part in the story and displays many layers of personality. There are no throwaway characters in the book.

Greylock’s imagery sweeps across the page, drawing the reader into a world of warriors and shieldmaidens, where an insult can lead to a death fight and not all enemies are human. She presents the mythological elements in such a way that the roles played by each figure show clearly, even to readers who have forgotten what they learned of Beowulf in school, but without lecture.

The powerful story uses Norse mythology but goes beyond, into a human story of hopes and dreams, relationships and revenge as the battle to fill the throne sprawls across the land. Faith and betrayal, friends and enemies spill forth to captivate the reader. Fans of the mythology will find plenty to enjoy, while fans of excellent character study will rejoice as well.

Greylock has thoughtfully included two reference tools: a map of Midgard at the front of the book and a list of important characters and their titles at the back. The tools, however, are not the main attraction of the book. The story steals the show, with the characterizations in hot pursuit. Greylock clearly loves the period and approaches the book with affection and depth.

Be forewarned, though. This is the first volume and the story does not end here. Fall in love with Greylock’s work and get ready to wait for the next installment.

The Blood-Tainted Winter: The Song of the Ash Tree – First Edda
By T L Greylock
Published by Grass Crown Press

Disclaimer: This review is based on a review copy of the book provided by the author or publisher with no constraints on my review. All opinions are my own.
Posted by Mary Beth Magee at 8:22 PM