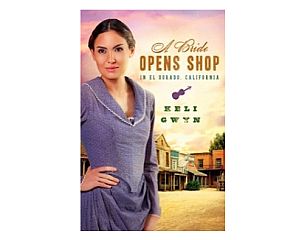 "Placerville author Keli Gwyn recreates the changing world of post-Civil War California with her new romance “A Bride Opens Shop in El Dorado, California.” The newly released novel features Elenora Watkins, a widowed mother and storekeeper from Omaha. Mrs. Watkins and her young daughter come to the town of El Dorado to become partners in a general mercantile store run by Miles Rutledge. Sparks fly when she arrives and learns he expected a man.

Gwyn has filled her story with wit and adventure. Mrs. Watkins forges a path into a male dominated business so that she can care for her daughter. Rutledge fights her every step of the way under the influence of previous relationship. Young Matilda Watkins charms everyone with her precocious chatter."

Read more of my review here.
Posted by Mary Beth Magee at 4:49 PM