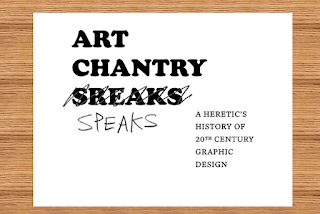 Consumers encounter graphic design everywhere they turn. The fonts, colors and shapes of advertisements and publications utilize the designer’s skills to attract attention, intrigue the viewer and direct the buyer toward the sale. As a designer for more than forty years, Art Chantry has seen a lot of techniques and practitioners come and go. He offers his perspective of the business in Art Chantry Speaks: A Heretic’s History of 20th Century Graphic Design.

Chantry considers himself a bit of an outlaw, both working as a graphic designer and making wry observations on the state of the art. His always witty, sometimes acerbic observations share his knowledge of the art’s history and the people within it. Using blog posts collected over a few years, he has put together an intriguing overview of his world.

Describing a graphic designer as a “virtual cultural propagandist,” he chops at the notion of graphic design as high art and reveals many of the subtle influences at work in good design. Both winners and losers come under his examination. He divides the articles into three sections: The Language of Design, Designers and Artists, and Tools of the Trade, Forgotten Processes and Obsolete Objects. Each section contains a variety of articles on aspects of the subject.

The reader will have no doubt as to Chantry’s opinions on any of his subjects. When he loves a subject, he waxes rhapsodic about it. His disdain for some topics swirls like an eddy around the reader’s feet, pushing and pulling at the reader’s understanding of the topic. The volume is no dry textbook, but rather a living commentary on something we all face every day. Chantry uses humor, sarcasm and insight to explain his positions and share the history he lived.

A generous number of illustrations fill the book, as Chantry makes his points about particular styles and artists. Be warned: some upper body nudity and occasional vulgar language make this inappropriate for young readers, in spite of the pretty pictures. Mature readers will take delight in the combination of words and images used in the book.

Each article stands alone, allowing readers to jump directly to subjects of most interest or read out of order. Taken as a whole, the book shares a world few consumers think about but must travel every day. Both educational and entertaining, readers will find when Art Chantry speaks, they should listen.

Part history, part psychology, part snarky opinion, Chantry wraps readers in the stories and leaves them amazed at what goes into graphic design. Art majors will enjoy the panorama of design influence. The rest of us can enjoy the inside look at how our minds get molded by designers.

Disclaimer: This review is based on a review copy provided by the author or publisher with no restrictions as to content. All opinions are my own.

Originally appeared 05/29/2015 at http://www.examiner.com/review/art-chantry-talks-graphic-design-upcoming-book-art-chantry-speaks
Posted by Mary Beth Magee at 9:44 AM