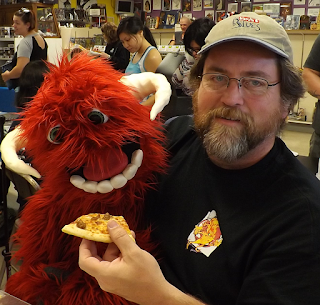 “Justice League. Aquaman speaking,” were the words coming through the telephone headset as Mississippi cartoonist Andy Childress of BubbaWorld Comix answered his phone for this interview, setting the offbeat tone for the conversation. Scheduled to appear at Southern GeekFest in Hattiesburg MS April 2-3, Childress brings a whimsical approach to the world.

He says he has been a cartoonist all of his life “whether I knew it or not.”

“I started drawing when I was one. I got interested in the Sunday funnies when I was three. When I was six, I realized ‘there’s words that go with this.’” He had a lot of fun imitating his favorite comic strips and comic books. Somewhere in the ninth grade, he says he “accidentally” created his first character in art class.

“…I couldn’t think of anything to do for Easter, so I drew the Easter bunny.” His teacher told him it looked like a chicken in a floppy eared hat. “Don’t tell him. He thinks he’s the Easter bunny,” Childress replied and Herman the psychotic chicken was born. Herman turns thirty-two this year, an enduring tribute to young imagination.

Childress has created a comic line about Redneck Time Lords, which pokes loving fun at the Dr. Who mystique. Other series titles include “Mississippi Swamp Dragons” and “Going Batty.” His cartoons show up on his website, BubbaWorld Comix, and in two books (to date) available through Lulu.

He conducts interviews for YouTube with a big monster puppet, Roscoe P. Kramer, “…because who’s gonna say ‘No’ to a puppet?” As he visits conventions, he records the cheery sessions to advertise both his favorite characters and himself.

At Southern Geekfest, Childress will have original artwork for sale at his artist’s table, as well as his books. Visitors who already have his books can bring them for autographs and doodles. Roscoe will be there, too, enchanting visitors with his toothy smile.

In addition to his original artwork and convention appearances, Childress is available to draw caricatures for events. He also can work from photos by email for caricatures.